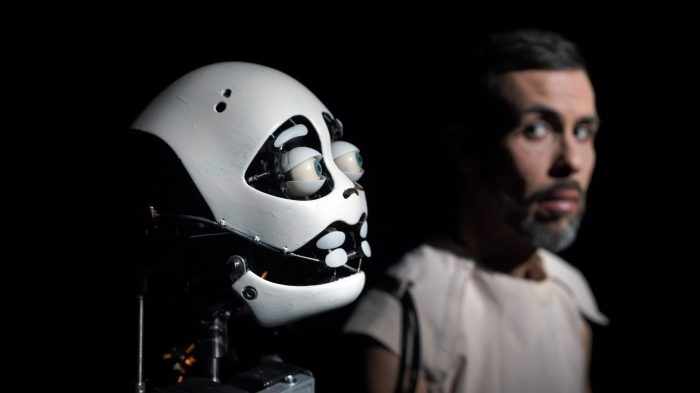 On stage any metamorphosis becomes possible and plausible. Thus, from an anthropological point of view, theatre is the place for the exploration of both the human being and his otherness. The robot – a term firstly used in a play in the 1920s – seems to find its natural place on stage, among masks and puppets, the theatrical objects that are able to create a scenic tension between the living and the inorganic, between the human and the artificial.

In the theatre of the last two decades very different artists – including Oriza Hirata, Stefan Kaegi, Kris Verdonck, Joris Mathieu, Marco Donnarumma – have integrated robotic devices in their performances. Multiple forms of creation emerge, defining opposing attitudes towards the place of the machine and its interaction with the actor: hyper-realistic imitations of the human figure, cyborg hybridizations of the body, works on the behavior and the performativity of non-anthropomorphic animated objects. Because of their autonomy – real, partial or simulated – these devices go beyond the puppetry, rising themselves to actors/performers. As a consequence, the acting techniques, the directing processes, as well as the effects on reception, need to be explored through renewed epistemological tools that can allow the understanding of the hybridization of the logics of programming and the logics of theatre, of the qualities of presence, and of the interactions between humans and machines.

On the other hand, robotic engineers seek to develop coherent socio-cognitive behaviors that produce in users an illusion of life, a feeling of being in the presence of intelligent and socially conscious creatures – sonzai-kan, the « feeling of being in the presence of another person » (Sumioka et al., 2014). Therefore, the theatre can be a particularly interesting space for the study of human behavior, where different technologies can be deployed to capture and model sensorimotor contingencies, while the stage can become an ideal semi-structured scenario for the development of metrics, models, techniques and algorithms capable of describing the interaction between humans and socially intelligent robots.

The webinar Robots on the stage – Fostering interdisciplinary convergences between robotics and theatre aims to open a common research ground on human-machine interactions and their dramaturgical potential by encouraging the reflection on shared questions and on similar theoretical concepts among international researchers and practitioners from both disciplines. The interdisciplinary crossing of views on specific theatrical performances that question the robotic presence on stage will also be at the heart of the proposed approach. Rather than focusing mainly on aesthetics, the webinar will analyze the stage interactions, the creative processes and the collaborations between artists and engineers through the conceptual tools of theatre studies, social robotics, cognitive sciences, psychology and neurosciences. Thus, this monthly webinar aims to provide an opportunity for encounters and debates, which will constitute the base to build a common vocabulary for robotics and the performing arts.

3. When humans become robots: Contes et légendes by Joël Pommerat – Friday 30 April, from 10am to 1 pm

The sessions will be held in French and/or English.
Given the current health situation, in order to allow the participation of the greatest number of people, the seminar will be virtualized and reachable on Zoom.

Please, register yourself in the following form to receive the link of each webinar: https://forms.gle/o1GRXK3pQ8pnWXYcA