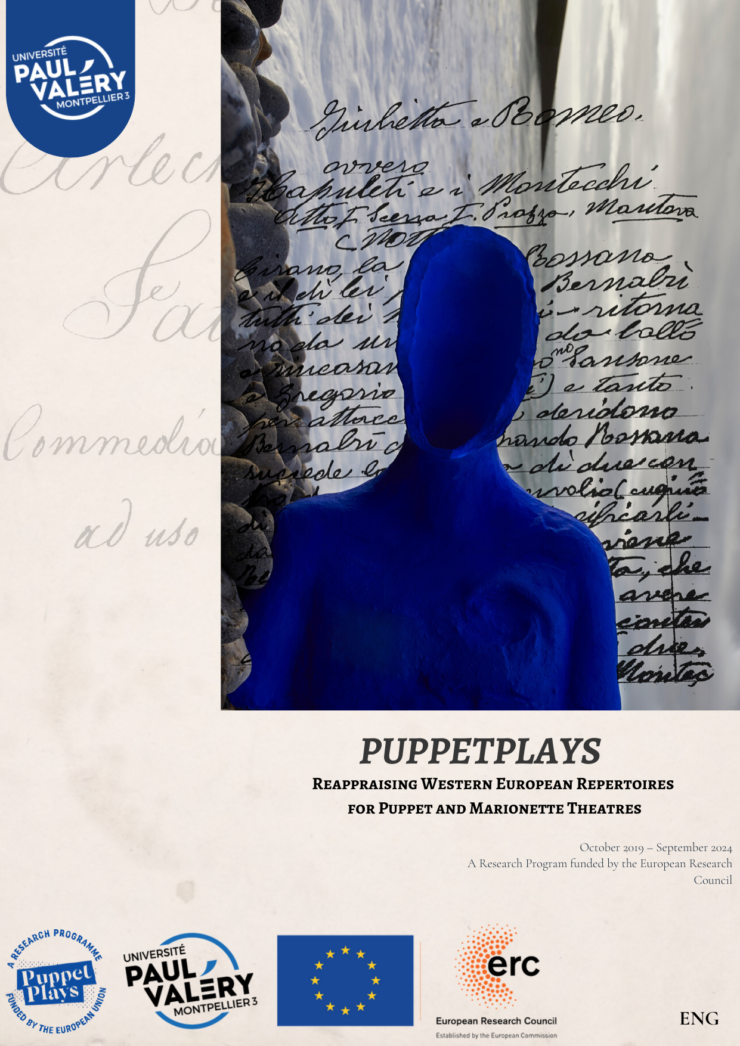 Overview of the conference:
From Johann Wolfgang von Goethe to Ramón del Valle-Inclán, from Charlotte Charke to Liliana Ugolini, from Alain-René Lesage to Ernst Toller, from Alfred Jarry to Italo Calvino, from Gerhart Hauptmann to Howard Barker, from Lewis Carroll to Marion Aubert, from Salvador Espriu to Tankred Dorst, from Federico García Lorca to Thomas Bernhard, from António José da Silva to Liliane Atlan, from Paul Claudel to Nelly Sachs…

Hundreds of European writers, some well-known, others less so, have written or write for puppets or marionettes. Some, like Ben Jonson, Henry Fielding, Restif de la Bretonne, Massimo Bontempelli, Arthur Schnitzler, Luigi Pirandello, Heiner Müller, have inserted scenes for puppets or marionettes into their plays. And for half a century, following in the footsteps of Dario Fo, Armand Gatti or François Billetdoux, plenty of playwrights have contrived to have living and animated figures interacting on stage. But what does “writing for puppets or marionettes” mean in real terms? Which material images does this theatrical tool summon up, and to what end? Which work processes are being employed here? What kind of specific constraints – or, on the contrary, what kind of new freedoms – can be found on this occasion?
Today, theatrical writing for puppets or marionettes is set in motion when a puppeteer, a company or an institution commissions it. This is how encounters and sometimes collaborations come about between artists previously unknown to each other, who discover each other and learn to work together: sometimes keeping to their respective territories, sometimes keeping up a close dialogue over the whole span of the creative process.
But when poets, novelists, playwrights take the initiative in writing “plays for puppets/marionettes”, what kind of project motivates their writing? Is it designed for a specific animation technique (glove puppets, marionettes, shadow puppets, objects, etc)? Is it, as was the case for Louis-Edmond Duranty, Rafael Alberti or Guido Ceronetti, accompanied by a desire to get fully involved in the staging of their artwork? Or is it merely a means of distancing themselves from the actors’ theatre of their time?

It follows that there are several modes of writing for puppets or marionettes; one of the very first tasks for researchers in this field must be to identify them and also, of course, to question them.
For writers, the puppet is never a neutral choice, because they risk straying from the beaten track of literary consecration and success, to the point where their work often never sees the light of day.
Under such circumstances, why would anyone write for puppets or marionettes? What status is conferred on the author in this branch of the performing arts where he/she has no customary place?

The choice to write for puppets could, for example, originate in a fascination for the traditions, characters, gestures, and language of the puppet. It might result from the limitations of theatrical life: for example, the prohibitions, monopolies, and censorship to which the 17th and 18th-century actors’ theatre was subjected. They could also be motivated by the desire to address an audience considered the most spontaneously receptive to this type of performance – children. Or it might be born of a desire to experiment with a more liberal dramaturgy, freed from the overly strict rules of verisimilitude, more open to poetry or experimentation.

Whatever the reasons or contexts which impel writers to summon puppets/marionettes, shadow puppets or animated objects to the stage of their mental theatre, it is crucial to examine the consequences for dramatic writing. What are the shifts that operate in the ways writers create characters, configure drama, organise dramatic action, choose the expressive register, the relationship with speech, and, the whole imaginary realm? To decide to work with puppets is to commit to a certain way of representing the human being, and sometimes also to let non-human beings enter the stage. It is to engage another level of convention within theatrical conventions, another relationship with reality and illusion. Ultimately, it is to take root in inorganic matter, and to produce tension between the living and the dead, the animate and the inanimate.

Like musical instruments, puppets as theatrical instruments have their own limitations and their own expressive powers. The ERC PuppetPlays research programme wishes to invite you to explore these unique writings born of an encounter with these instruments, focusing for its first international symposium on the contribution of writers, poets, novelists or dramatic authors to the forging of a dramaturgy specific to puppets.

Questions:
Particular attention will be paid to the following questions:

All these questions are, of course, contingent on the nature of each unique work and its production context. An indicative (and non-exhaustive) list of texts for puppets or marionettes (as well as for
actors and puppets or marionettes) which are expected to generate research proposals is appended to this call for papers.
To avoid the simple juxtaposition of case studies, preference will be given to comparative approaches which shed light on the way works written for puppets are included in the theatre system of their time.
A second conference, in 2023, will be dedicated to plays written by puppeteers.

Submissions and deadlines:
Proposals for papers, of a duration of 20 minutes, should arrive at these two e-mail addresses (didier.plassard@univ-montp3.fr and carole.guidicelli@univ-montp3.fr) no later than 30th April 2021.

They will take the form of an abstract in English or in French of 300 to 500 words, along with a bio-bibliography and the author’s personal contact details. The working languages of the conference are English and French. In accordance with the principles of open science, the proceedings of the conference will be published on an open-access platform. The organising committee will communicate its decisions, taken on the advice of the scientific committee, in June 2021.

PuppetPlays (2019-2024) is a research project funded by the European Union via the Horizon 2020 programme of the European Research Council (G.A. 835193) and hosted by Université Paul-Valéry Montpellier 3 (France). Under the direction of Prof. Dr. Didier Plassard (Université Paul Valéry – Montpellier 3), its first aim is to offer public access to the repertoire of works written for puppets in Western Europe from the 17th to the 21st centuries on a dedicated digital platform. The launch of this platform is scheduled for 2022.
In the meantime, a presentation of the project and PuppetPlays’ activities can be consulted at this address: https://puppetplays.www.univ-montp3.fr/fr